Charlotte’s signs tell a colorful story of the city’s rich history and culture.

For the last decade, 8th-generation-native-Charlottean and photographer Christopher Lawing has been telling this story through his photos of iconic signs from the past and present. 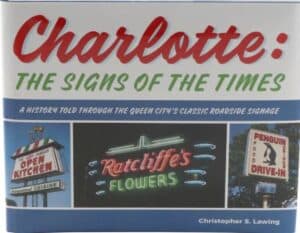 Christopher Lawing is one of the newest and youngest lights on the Charlotte photography scene.

He is also a walking encyclopedia when it comes to the city’s historic signage. He can tell you not only the location of almost every iconic sign in Charlotte, from Mr. K’s Soft Ice Cream on South Boulevard to the Open Kitchen on West Morehead Street, but also the stories behind the landmark businesses and the signs themselves.

His passion for these signs and interest in their history, along with his photography skills, naturally led to his new book, Charlotte: The Signs of the Times. The book showcases the Queen City’s unique and historical roadside signage via Christopher’s signature colorful photography, including photos of well-known signs such as South 21 Drive In, Dairy Queen, and JFG Coffee, joined by more than 100 other shots of signs ranging in age from the late 1920s through modern day. Each photo includes the sign’s location, the business’ date of operation and status, and whether the sign is saved in a private collection, lost to progress or still on display.

Now just shy of a decade ago, Christopher began the project when he chose to photograph Charlotte’s iconic signs for a high school photography class thesis. It was an easy decision for him to choose this subject and to photograph these unique signs for his project, as he is an eighth-generation Charlottean who loves design and the city’s history. He knew people identified with these places as important Charlotte landmarks, and he wanted to photograph them to show that the Queen City indeed has a rich history.

Christopher graduated from North Carolina State University with a Bachelor Of Industrial Design degree in 2015, and still resides in Charlotte, NC, calling it his home.