As we go through our daily activities it is important to consider all the ways we may assist or hinder our brain functioning by the choices we make. Dr. Howard, the author of four editions of “The Owner’s Manual for the Brain,” published in 2014 by William Morrow, will explain our options including caffeine, atmosphere, nutrition, napping, exercise, alcohol, and sleep. 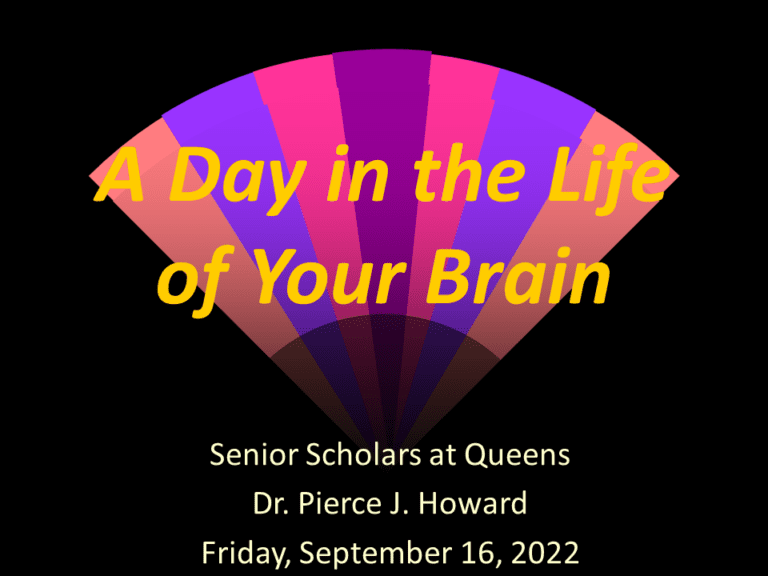 Pierce J. Howard, PhD was born in Kinston, North Carolina. Making his way through public schools, he learned to love reading, writing, mathematics, music, and nature. Four years at Davidson College stoked his passion for literature, music, philosophy, and psychology. Three years in the U. S. Army as a Military Intelligence Specialist molded his penchant for research and investigation. During graduate school at East Carolina University and the University of North Carolina at Chapel Hill, he changed his major from literature to educational psychology.

His first job was with the North Carolina Advancement School in Winston-Salem. Moving to Charlotte in 1977 to teach at West Charlotte, Pierce then co-founded LEAD (long E) Associates in 1979. Between arriving in Charlotte and retiring, Pierce also served as an adjunct professor at UNC—Charlotte, Pfeiffer University, and most recently the McColl School of Business at Queens University.

In 1986, along with his wife, Jane, he started a consulting company, now named Paradigm Personality Labs. Over 32 years, they offered training, team building, coaching, and personnel research to clients on six continents. In 1994, Pierce wrote and published The Owner’s Manual for the Brain, now in its 4th edition and published by William Morrow. He even appeared as a guest on “Oprah” in 1996. Subsequently, he wrote more than 20 books. The Howards’ core service has been through several personality assessments that they developed: the WorkPlace Big Five Profile™, the SchoolPlace Big Five Profile™, the WorkPlace Values Profile™, and the WorkPlace Performance 360◦™. In 2018, Pierce retired as the Chief Innovations Officer at Paradigm, but in retirement, he’s now writing The Owner’s Manual for Critical Thinking!

Great Decisions Topic: Russia and the US

Making History in Our Own Time