The nation’s founders did not contemplate political parties. In fact, they viewed such factions as potentially dangerous to the American experiment. Yet, we have them.

But the parties themselves have hardly been permanent institutions.

The Federalists and the Democratic-Republicans battled against each other for nearly three decades after the framing of the Constitution in 1787.

The Federalists disappeared and the Democratic-Republicans became, separately, the Democratic Party and the Whig Party by the 1830s.

The Whig Party cratered in 1852, and a new party, the Republican Party emerged in 1854. Since then, there have been numerous other parties – the Populists and Progressives being the most successful – but the Democrats and Republicans have remained prominent. However, the base of both parties has shifted dramatically since the 1960s.

Now, in the 2020s, we may be witnessing another major realignment of political parties and perhaps the rise of a new party. 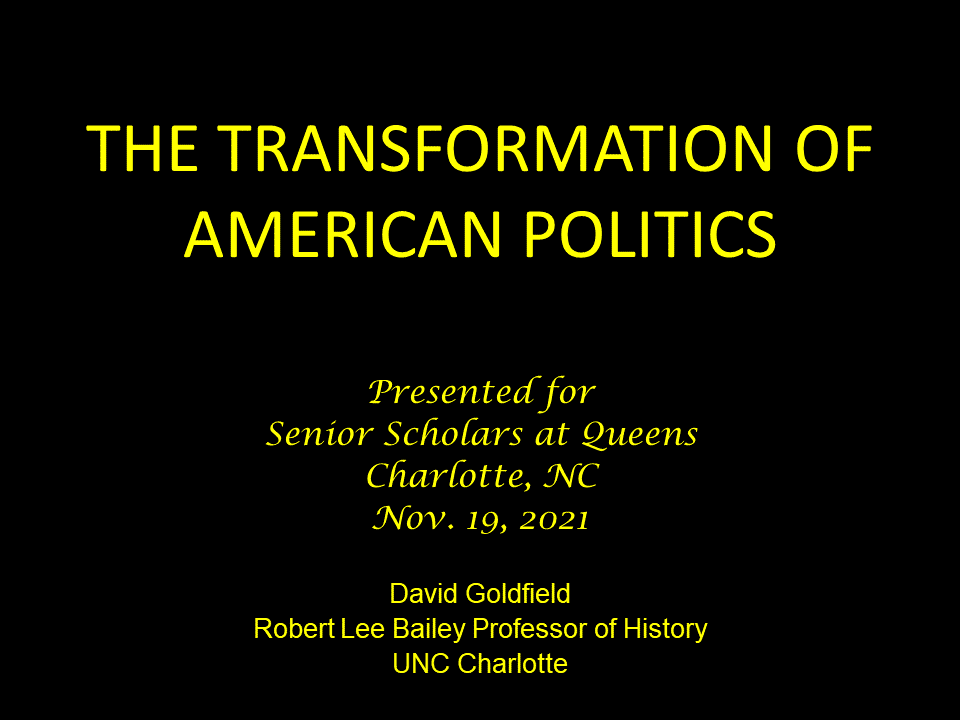 David Goldfield is the Robert Lee Bailey Professor of History at the University of North Carolina, Charlotte, a position he has held since 1982.

A native of Memphis, he grew up in Brooklyn and attended the University of Maryland.

He is the author or editor of sixteen books including two, Cotton Fields and Skyscrapers (1982) and Black, White, and Southern (1991), nominated for the Pulitzer Prize in history.  His most recently published books are:

Goldfield is also the Editor of the Journal of Urban History, and serves as Distinguished Lecturer for the Organization of American Historians, and as an academic specialist for the U.S. State Department.

He is Past President of the Southern Historical Association (2012-2013). Goldfield also serves on the Executive Board of the human rights organization, the International Coalition of Sites of Conscience, and on the Board of the North Carolina Civil War and Reconstruction History Center.

His hobbies include reading southern novels, watching baseball, and listening to the music of Gustav Mahler and Buddy Holly.