Liz Clasen-Kelly will explain how it came to be that thousands of our neighbors in Charlotte are experiencing homelessness. 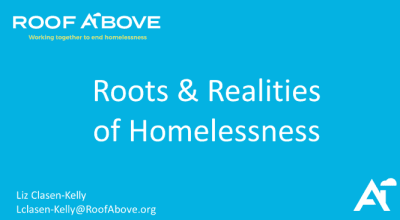 Liz Clasen-Kelly serves as the CEO of Roof Above, the merged Men’s Shelter of Charlotte and Urban Ministry Center.  She previously served as the Executive Director of the Men’s Shelter of Charlotte, where she led the shelter’s effort to renovate its N. Tryon Campus. Previously, as the Associate Director of Urban Ministry Center, she oversaw the community’s street outreach efforts and served as project manager for the community effort to end chronic homelessness.

She is recognized as an active leader to increase affordable housing, especially for those at the lowest incomes, and uses her voice to push for systemic change across our community-at-large.

She is a graduate of Davidson College and received her Master of Public Policy from Duke University.  She is a proud member of a blended family, with four kids ranging from 7 to 23.