Since the days of the Roman Empire, the fate and fortunes of the British Isles have been tied to events and political developments on the European continent despite the independent mentality of staunch British Nationalist.

In the aftermath of World War II Winston Churchill in 1946 advocated for the creation of an economic and political framework that would prevent conflict among European powers. As a result, several economic integrations ideas were advanced, but the UK had a dual personality about such concepts by not fully embracing these concepts.

The latest was the European Union which was established in 1992.  However, once again the UK never fully committed to the EU. Dr.

Kelso will lead us through the various convoluted developments of how the UK ended up leaving the EU and what the long-term impact will be for both the UK and the EU-it is a complicated scenario. 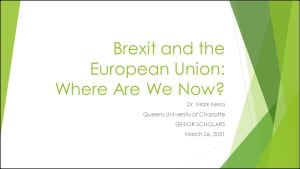 Additional reading – some require the purchase of a book.