As the transition of the world’s energy economy to reduce carbon intensiveness accelerates, the question of the role of civilian nuclear energy looms large. Can the world decarbonize energy production without this emission free energy source as some countries are attempting following the 2011 Fukushima Daiichi nuclear accident in Japan? Or will existing plants be kept operating and new plants based on advanced reactor technologies be built to expand this energy source far into the future? This presentation explores the issues and the consequences of decisions that impact the modern energy economy and asks the audience to reflect on the complexity of setting nuclear energy policy. 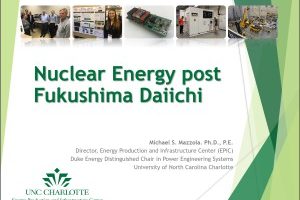 A native of Virginia, Dr. Michael S. Mazzola received his Ph.D. from Old Dominion University in 1990. In July of 2017 he was appointed the Executive Director of the Energy Production and Infrastructure Center (EPIC) at the University of North Carolina Charlotte and the Duke Energy Distinguished Chair in Power Engineering Systems.

Prior to these appointments he was a professor of electrical and computer engineering at Mississippi State University and the Jack Hatcher Chair for Engineering Entrepreneurship. In 2009 he was named an Associate Director for Advanced Vehicle Systems at the MSU Center for Advanced Vehicular Systems (CAVS). Beginning in 2005 he served for two-years as the chief technology officer of SemiSouth Laboratories, a company he co-founded.

He and his wife Janice have been married for 34 years and have three grown daughters.