The Coronavirus Pandemic - What You Need to Know Now

The Pandemic has changed our lives…maybe forever. Over 43 million worldwide have been infected. Misinformation abounds. Learn the latest information about the coronavirus and what you need to know about how to protect yourself and your loved ones. What does the science tell us? What vaccines look the most promising? How do I reduce my risk of infection? What activities can I undertake with others are the safest? 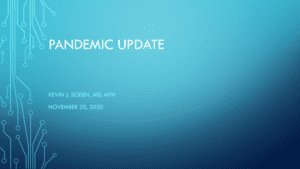 Dr. Kevin Soden, an Emmy, Telly, and International Freddie Award-winning medical journalist for more than 20 years, can now be seen each day as the host of Healthline, a daily half-hour medical show on the Retirement Living Network. He was a National Medical Reporter for NBC News Channel and has also appeared regularly on NBC’s Today Show. He is also been a regular on the nationally-syndicated golf show, “Par for the Course.”

Kevin currently serves as the worldwide Medical Director for Texas Instruments and the Cardinal Health Corporation and teaches as a courtesy Professor at the University of Florida College of Medicine. His other awards include the 2001 National Award for Excellence in Medical Reporting from the National Association of Medical Communicators, a finalist for the International Freddie Awards in 2001, and as the Executive Producer for “Rush of the Palms” received the 2003 International Film Critics award for short films. He served 23 years as an ER physician and was also the founder of the oldest, largest, physician-owned managed care organization in the Carolinas.

In 2003, Kevin published “The Art of Medicine: What Every Doctor and Patient Should Know”, a critically acclaimed book focusing on doctor-patient communications and how to improve the doctor-patient relationship. He is also the primary author of a consumer medical book “Special Treatment: How to Get the High-Quality Care Your Doctor Gets” published in September, 2003. He is also a contributing author to the recently published “A Practical Approach to Occupational and Environmental Medicine” and to “Physician Leaders: Who, How and Why Now?” He is soon to publish his third book, “Women, Stress and Happiness: 10 Steps to Having It All and Saving Your Life.”

Dr. Soden graduated with honors from the University of Florida College of Medicine and is one of the original inductees into the University of Florida Medical Wall of Fame. He also has a Masters in Public Health from the Medical College of Wisconsin and a Masters in Personnel Administration from Florida State University. He graduated from Belmont Abbey College with a degree in History (Yes, you can get a job with a history degree.)