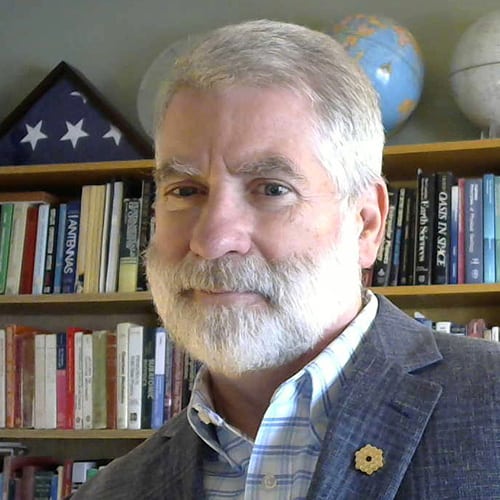 In-Person Wolfe Hall attendance no longer requires advance registration or a ticket. On May 27th Mr Menzel will join us via Zoom. Members and Guests who adhere to the Senior Scholars safety protocol are invited to join us Wolfe Hall. Please refer to the Hybrid FAQ’s updated April 20th.

The James Webb Space Telescope (JWST), launched on December 25, 2021, is NASA’s successor mission to the Hubble Space Telescope. JWST has been designed and developed to observe “first light” objects in the nascent universe, the evolution of galaxies over cosmic history, star birth within our own galaxy, planet formation and evolution both in our solar system and in solar systems around other stars and to make detailed observations of some of the recently discovered exoplanets.

The JWST telescope has an aperture greater than 6 meters in diameter, and along with its complement of science instruments must be cooled to cryogenic temperatures below 50K. It will be operated at the Sun-Earth L2 point to keep thermal sources such as the Sun and Earth in the same general direction so that their radiation can be shielded by a “tennis court sized” sunshield, allowing the payload to attain these temperatures passively.

This presentation will give an overview of the JWST science and systems design from the perspective of the NASA Mission Systems Engineer.

Mr. Menzel has 41 years of experience in the aerospace, working 23 years in industry for commercial and defense missions and for NASA for the past 18 years.  He is currently the Mission Systems Engineer for the James Webb Space Telescope.

Mr. Menzel received a B.S. in Physics from the Massachusetts Institute of Technology in 1981 and an M.S. in Physics from Columbia University in 1986.  He began his career in 1981 with the RCA Astro Space Division in East Windsor, N.J. as an antenna engineer, designing flight antennas for commercial and defense communications and remote sensing satellites.  In 1990 he took a position in the Systems Engineering Group of the General Electric Astro Space Division designing commercial, DOD and civil space systems.  In 1995 he took a position as Director of Systems Engineering in the Orbital Sciences Corporation, and in 1997 he took a position as the Deputy Program Manager for the Hubble Space Telescope Servicing Group at Lockheed Martin.

Mr. Menzel began working on the Pre-Phase studies for the Next Generation Space Telescope in 1998, and in June of 2004 he took the position as the NASA Mission Systems Engineer for the James Webb Space Telescope.

In addition to his various engineering positions, Mr. Menzel has also served as an adjunct lecturer in Physics and Astronomy at various colleges.