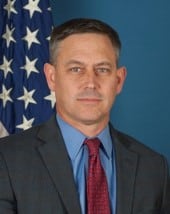 In recent years we’ve learned their names: Three-Percenters, American Patriots, Oath Keepers, and more recently the Rise of the Moors. We watched in April 2020 as militiamen stormed into the Michigan State Capitol and stood in the gallery to threaten lawmakers, semiautomatic weapons ready in their hands. We watched on January 6th as militiamen dressed in tactical gear marched up the steps to the U.S. Capitol in military formation. More recently, we watched as eleven men who claimed to be associated with the Rise of the Moors, armed with long-guns and dressed in tactical gear, were arrested after an hours-long standoff with police on a highway in Massachusetts. How serious is the threat of terrorism in the United States? Special Agent Scherck will discuss the militia movement and other aspects of the Domestic Terrorism/International Threat in the United States, focusing on the threat in the state of North Carolina.

Michael C. Scherck began his career as a Special Agent with the FBI in 2004 and reported to the Atlanta Field Office where he worked International Terrorism. While in Atlanta, he participated in extended OCONUS (Outside the Continental United States) deployments to Bangladesh and Afghanistan. Mr. Scherck was promoted to Supervisory Special Agent assigned to the Counterterrorism Division, ITOS I/CONUS I (Information Technology Outsourcing Services/Continental United States). After a transfer to the Columbia Field Office, he was assigned as the supervisor for a hybrid Cyber/Counterintelligence Squad. While assigned to the Columbia Field Office, Mr. Scherck served a one year TDY to the Inspection Division as a Team Leader. In September 2018, Mr. Scherck was promoted to Assistant Special Agent in Charge in the Charlotte Field Office.

Prior to joining the FBI, Mr. Scherck worked as a Fairfax County Police Officer/Detective. He is married, and he and his wife have three children.