Great Decisions Topic: The Philippines and the U.S.: Change with Continuity

From colonial rule, to commonwealth, and finally ally, the relationship of the Philippines and the United States is enduring but often exceedingly idealistic, unrealistic, and impractical. For the Philippines, there seems to be no other country that can hold it in thrall like the United States.  However, contemporary US-Philippine relations are beset with challenges brought about by newly elected President Duterte’s war on drugs and his Administration’s pivot to China and Russia.  Duterte’s pivot away from the U.S. need not be construed as a complete severance of ties, but rather a recalibration of interest. With China’s more aggressive behavior on several fronts, what does this mean for the U.S. Philippines relationship? 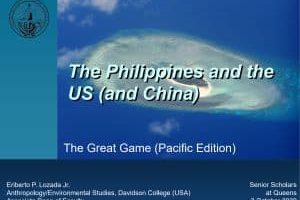