“When good Americans die they go to Paris,” or so Oscar Wilde famously claimed. Perhaps so, but many don’t wait quite that long for their first visit to the City of Light. Americans – the good, the bad, and the ugly – have been drawn to Paris since before the United States became the United States, and American writers have often led the way to the place Ernest Hemingway celebrated as “the city I love best in all the world.”

What drew them to the city? To the Left Bank in particular? How did the city influence their writing? Where did they live, laugh, and write? Join us as David Collins leads a walking tour of Left Bank sites made famous by American Authors and offers his answers to those questions. 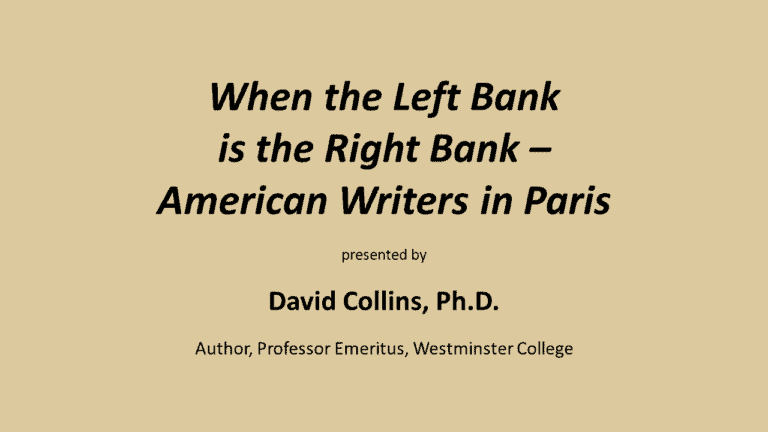 BIOGRAPHY
David Collins is a Professor of English, Emeritus at Westminster College in Fulton, Missouri where for forty years he taught courses on Shakespeare, Creative Nonfiction, American Writers in Paris, and Paris Noir (black writers in Paris, team-taught with a professor of French).

His first project after “retiring” was a book about a former student and his then-partner, now husband, Accidental Activists: Mark Phariss, Vic Holmes, and Their Fight for Marriage Equality in Texas (University of North Texas Press, 2017). In 2016 the manuscript for Accidental Activists won the Mayborn Award for Excellence in Nonfiction; in 2017 it was chosen as a finalist for an INDIES “Best Book” Award.

Trained as a specialist in Shakespeare, Collins published more than fifteen scholarly essays in his days as a college professor, most on Shakespeare and Renaissance literature but including several on American writers who lived in and wrote about Paris: Ernest Hemingway, Richard Wright, James Baldwin, and Langston Hughes. In the last twenty years of his career, Collins began writing personal essays, many of which are about experiences in Paris. He has written for commercial magazines (St. Louis Magazine, Leadership Magazine, The Quadrangle, Inside UNT Press) and done op eds, columns, and feature work for two newspapers.

Collins is working now on a novel set in Paris (working title, Shadows of Notre Dame) and dreams of turning the 400-odd pages he has written about sites in Paris made famous by American writers into a book-length walking tour. When he’s not sitting at the computer writing, Collins enjoys listening to jazz, reading, a little time at the piano, and a little time on the golf course with his wife and grandson.